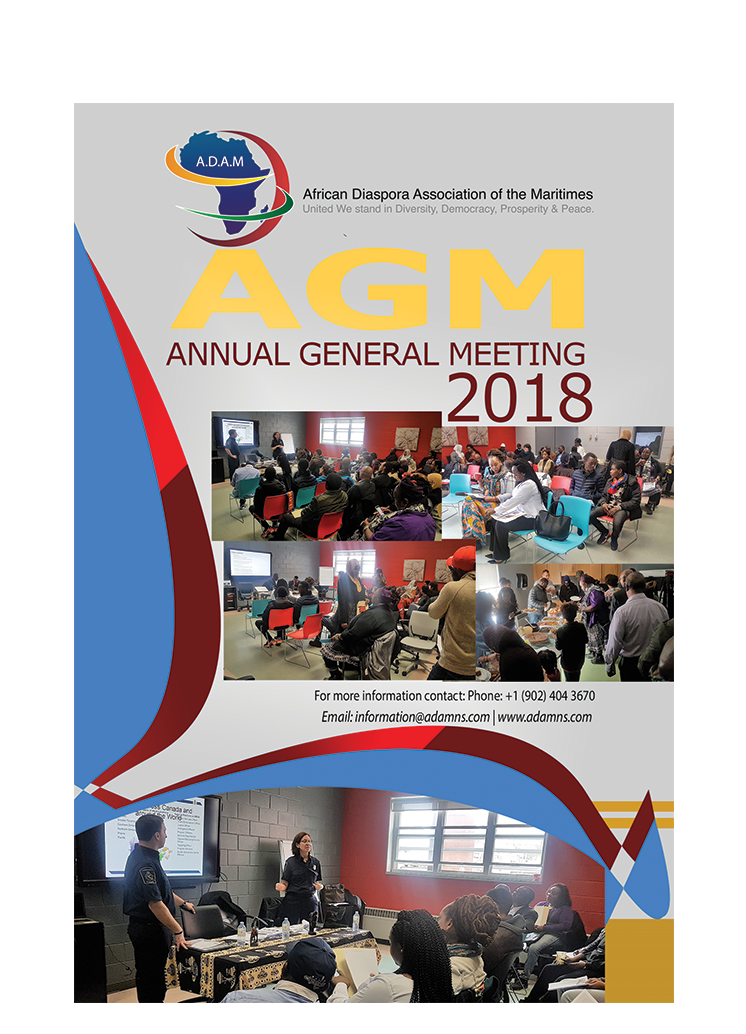 As we continue moving forward fulfilling the Adam mandate, we note that it is now twenty years ago since the original research that birthed ADAM was conducted.  Four areas of attention still take the fore as were identified at the time, and one more from this AGM:

ADAM continues to strive to provide service in all these areas as the examples above show.

2017 was both a challenging year as well as a stepping stone.  The Board members give selflessly of their time attending meetings, making decisions and performing many other tasks. It is their work which enabled ADAM to finish the year on a very high note with our join gala effort with the United African Canadian Women’s Association (UACWA).  They have been wonderful partners and we look forward to building on our relationship.

On that note,  the Nova Scotia Office of Immigration (NSOI) has renewed ADAM funding for another two years from 2018-2020.   Late in the year, ADAM added a program from the Public Health Agency of Canada (PHAC) in partnership with the Association of Black Social Workers (ABSW), the Health Association of African Canadians (HAAC), and the Canadian HIV/AIDS Black Caribbean (CHABAC) network.  These four agencies have banded together on this five year initiative to promote the prevention of HIV/AIDS, Hep C, STBBIs in the African, Black and Caribbean communities.

The initiative worth nearly $500,000 over five years is injecting close to $10,000 annually to ADAM in rental income and administrative fees for being part managers of the project.  This is a giant step forward for ADAM.   It will allow ADAM to arrest the deficit created by the rent we pay for our premises.

ADAM is also in the running for the $50,000.00 Building Vibrant Communities grant from CCH and also the $1,000,000 project on Promoting Safety for Victims of Gender based violence from the National Advisory Council on the Status of Women.  There are also a number of other smaller initiatives ADAM results.  But we do have results on funding from ANSA for the gathering of nations event and from CCH on Organizational capacity building.  A tender for this role will be going out shortly.

The Next 20,000 refugee intake from Africa project that was launched last year already has it’s first family intake.    The Balanga family comprising mother and her four children, arrived on February 19, 2018 and have already settled down on Plateau Crescent.  It is not uncommon for people to scoff at small steps.  Mother Theresa, who in her lifetime looked after forty thousand homeless people, was once asked how she had managed such a huge feat. Mother Theresa responded as follows:  “I picked them up one person at a time.”  ADAM has begun the long march to 20,000 by 2030.

A new feature of ADAM’s work this past year was joining hands with the newly established Pan African Network Against Slavery (PANAS) to add strength to the fight against Abdoul Abdi’s deportation.  The office Manager attended the court hearing and his remarks were featured in the media.  Two letters signed by our able outgoing-chair were sent to the ministers of Immigration and Public Safety lobbying for allowing Mr. Abdi to stay on humanitarian grounds.  The results so far are encouraging in the deportation hearing is on hold till May.  This gives time for the Supreme Court to hear his case.  Special thanks to Ms. El Jones who has championed this case and brought to the attention of the PANAS network.  The PANAS network in turn brought ADAM into the picture.  We are indeed stronger together.

Another growing element in ADAM work is the Atlantic Immigration Pilot Program.  The Board is pleased that ADAM is one of the recognized settlement agencies.  This represents a growing field of work as more people on the African continent discover that Nova Scotia is a good place to live and raise family.

As  the new board moves forward, we seek to build the ADAM brand, preparations are in the works for a strategic planning retreat for the Board of Directors.  This will be a time to look back on the history of ADAM and seek to emerge with revamped documents as well as our growth plan for the next five years.  ADAM is looking forward to the following:

The Cultural Expressions portfolio was highlighted to be develop into a fully-fledged unit within the office as ADAM had before.  ADAM is looking forward to organising for the first time the gathering of Nations Conference, which will bring together all the national associations in Nova Scotia.

ADAM continues to strengthen and develop new partnerships and linkages.  Officers from Canada Border Services (CBSA) presented at the AGM.

A brief like this cannot capture everything but it gives you a peak at the work of the board the past year.  we delightfully look forward to the future with its promise as well as challenges.   Remember our motto of standing United in our Diversity to promote peace and prosperity.

Special thanks to Godfred Chongatera for his dedicated service to ADAM, as well as all the outgoing board members! Your input is a great boost to the ADAM community and beyond.